The Children Satsanga attendees at Noida Ashram participated in several programmes through cultural and spiritual activities in 2022. Here are some reports of these events:

The festival of lights was celebrated at YSS Noida Ashram on October 23, 2022, with 50 children accompanied by parents and volunteers. Swami Nishthananda and Brahmachari Alokananda joined the children in these celebrations.

With the help of volunteers, children drew a colourful rangoli in the Garden Vedi of the ashram. The programme began with the Energization Exercises, a prayer, chanting, and meditation. It was followed by a reading from the Autobiography of a Yogi and bhajans. The highlight of the day was a short cultural programme including a skit on Lord Hanuman, depicting his matchless devotion for Lord Rama.

Towards the end, Brahmachari Alokananda and Swami Nishthananda addressed the children. They appreciated the enthusiastic participation of the little ones in their performances and entertain them with a few stories. Swami Nishthananda spoke on the beauty of the singlehearted devotion of Bhakta Hanuman for Lord Rama.

Swami Vishwananda joined the festivity and distributed prasad to the children and the volunteers.

Krishna Janmashtami was celebrated by children and volunteers of YSS Noida ashram’s Children Satsanga on August 19, 2022. About 35 children along with their parents and volunteers attended the programme. The programme began with the Energization Exercises, an opening prayer, chanting, and a brief meditation.

Later, YSS monastic Brahmachari Alokanandaji addressed the children, narrating a few enrapturing stories and concluded with a short prayer, leading the pushpanjali by offering flower petals at the holy feet of the beautifully decorated picture of Bhagavan Krishna.

Kheer (rice pudding) was distributed as prasad. The programme was enjoyed by all the attendees and the whole ashram was charged with love and devotion for Bhagavan Krishna. 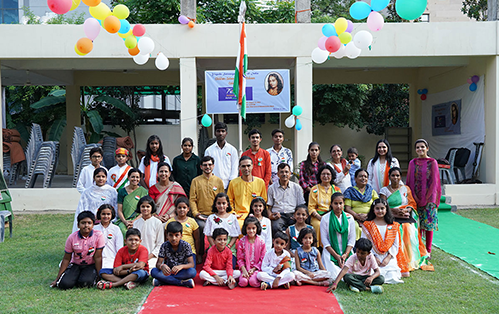 On August 15, 2022, the 75th anniversary of the Indian Independence Day was celebrated by the Children Satsanga attendees and volunteers at YSS Noida ashram. YSS Swamis and Brahmacharis were present at the programme. Around 110 people from Noida and the neighbouring areas, including parents and ashram sevaks attended this event.

A cultural programme was presented by the children which included devotional chanting, a brief meditation, recitation of Gurudeva Paramahansa Yogananda’s poem My India, and releasing of balloons at the conclusion of the event. The venue was decorated with multi-coloured balloons. The cultural presentations by the little ones drew applause from the audience. The concluding address was given by Swami Vasudevananda.

The programme closed with a prayer after which refreshments were served.

The sacred occasions of Guru Purnima (which was on July 13, 2022) and Mahavatar Babaji’s Smriti Divas (July 25) were celebrated by the Children Satsanga of YSS Noida ashram on July 24, 2022. Around 80 children, 40 parents and 25 volunteers attended this programme.

The event started with the lighting of a lamp by Brahmachari Alokananda amidst the blowing of conch shells. 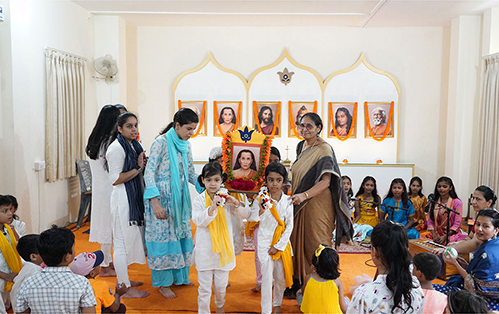 The theme of the day was “Guru-Disciple Relationship.” The cultural programme included four short skits performed by the Children Satsanga students depicting the relationship between each set of Guru and disciple – Mahavatar Babaji and Lahiri Mahasayaji, Lahiri Mahasayaji and Swami Sri Yukteswar, Sri Yukteswarji and Paramahansa Yoganandaji, and also between Paramahansa Yoganandaji and Sri Daya Mataji. A few children sang bhajan and cosmic chants as the skit was enacted.

Addressing the gathering, Brahmachariji explained the significance of Mahavatar Babaji Smriti Divas, and read out excerpts from the Autobiography of a Yogi pertaining to Mahavatar Babaji. The celebrations concluded with pushpanjali, accompanied by melodious bhajans.

In the end, prasad was served to all the attendees.

The International Day of Yoga was celebrated by the Children Satsanga of YSS Noida ashram on June 18, 2022. It drew participation from 45 children accompanied by their parents and 15 volunteers. 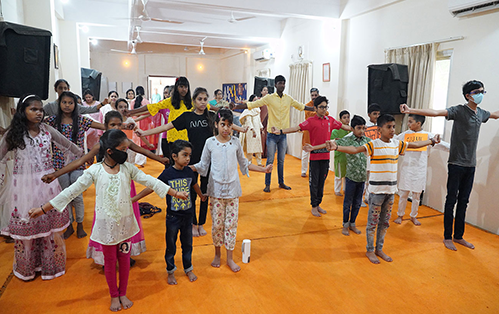 The programme included Energization Exercises, a short prayer, and a chant. Brahmachari Alokananda introduced the children to the significance of the International Day of Yoga and shared with them an understanding of Ashtanga Yoga. He also shared some stories emphasizing the importance of meditation in realizing our true nature with the young audience.

A quiz was also conducted on the theme of the International Day of Yoga and ashtanga yoga that drew active participation from the children.

The celebrations closed with a prayer by Brahmachari Alokananda, following which prasad was served to all the participants. 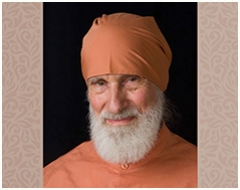 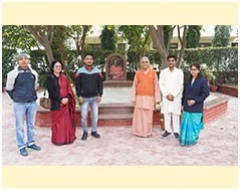 Three former students of our Charitable Coaching Centre at the YSS Noida Ashram, have joined the highly prestigious...
Read More 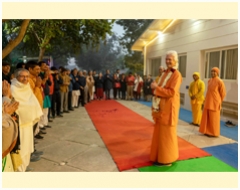