Swami Chidananda Giri, President of Yogoda Satsanga Society of India/Self Realization Fellowship (YSS/SRF) visited Noida Ashram on Wednesday November 1, 2017. He was accompanied by Swami Vishwananda Giri and Brahmchari Saujanyanandaji. Swamiji and the other two monks arrived at YSS Noida Ashram in the afternoon.

Inside the Ashram, a large L shaped Red Carpet was laid and devotees were standing on both sides of the carpet to receive the distinguished guests. After all, the last time a President of the Society visited India was in 1972 when most of the present generation of devotees was yet to be born. The progress of the motorcade was being relayed to the eagerly awaiting enthusiasts on public address system. A battery of photographers was lined up for the special occasion. Devotees specially assigned were ready with garlands to be passed on to the Noida monastics. Conch shells were ready in the eager hands of two monastics and two devotees. A very large banner welcomed the President Swami Chidiananda Giri Ji, Swami Vishwananda Giri Ji and Brahmchari Saujanyananda Ji in this Centenary Year of Yogoda Satsanga Society of India.

Swamiji’s car entered the Ashram gate and reached the beginning of the red carpet. Swami Chidanandaji was garlanded by Swami Lalitanandaji, Swami Vishwanandaji was garlanded by Brahmchari Dhairyanandaji and Brahmchari Saujanyanandaji was garlanded by Brahmchari Sheelanandaji amidst blowing of conch shells by other monks and devotees. Devotees lined up on both sides of the red carpet showered rose petals on Swami Chidanandaji and other visiting monks. Swamiji walked slowly amidst the joyous devotees who were overwhelmed in meeting and greeting him on his first visit to India after becoming the President of the Society. Swamiji’s continuous smile and greeting to one and all made everyone feel as if they were sharing his love and fellowship with old friends meeting once again on this holy land of seekers of God.

In the porch of the main building, in one corner, a group of lady devotees were singing Bhajans accompanied by Tabla and Cymbals. Swamiji and other monks climbed up the porch stairs and Swamiji offered Pranams to the illuminated picture of Guruji kept near the entrance to the Reception. The whole atmosphere was charged with devotion plus chanting and Jaikar. The area was reverberating with holy vibrations and about 200 devotees present at the time, felt uplifted.

The next programme was to begin at 5 pm in the Auditorium. As hectic preparations were in progress in all areas of the Ashram, especially Langar Service Area and Auditorium and its surroundings, passages and overflow areas, Swamiji went around, accompanied by all present Monastics and personally had a glimpse of the premises, it being his first visit to the Noida Ashram.

The evening programme was unique in more ways than one. The seating arrangement in the Hall was meant to cater to 1000 devotees. Devotees in large numbers started arriving as early as 3.30 pm and started filling up the hall. Overflow area between the two Retreat Blocks was made ready by providing 100 chairs in front portion of the ground and provision for another 100 chairs in the rear. Chairs for the rear area were to be borrowed from the Dining Area incase need arose. Sure enough, the need arose early and the whole overflow appeared full whilst the programme was just beginning.

The stage was well lit with newly installed white LED flood lights. The Altar was beautifully decorated with fresh flower garlands and other flower arrangements. A very large picture of standard pose of Guruji adorned one side of the stage in front of which two decorated and  covered Baskets were kept containing Prasad packets to be distributed to devotees after being blessed by the President at the end of the programme. Bhajan mandali comprising of Monastics were to be seated on the carpet next to Guruji’s large picture. On the other end of the stage, a lectern was placed. Near the lectern, chowki and table were placed for use by the President during his Satsanga.

Other areas in the vicinity of Auditorium were tastefully decorated with flowers, lighted decorative lamps etc. A large banner adorned the top of Auditorium entrance welcoming the visiting Swami Ji and brother monks. .

The programme started with Opening Prayer, Chanting and a short meditation led by Swami Lalitananda Ji. Thereafter, Bhajans were sung by Brahmchari Dhairyanandaji whilst Brahmchari Sheelanandaji played other musical instruments. Tabla and Cymbals were played by devotees. All the 1400 devotees sitting in the Auditorium, Overflow area as well generally standing around the entrance joined in singing of these devotional chants. Around 6 pm whilst the Bhajans were still going on, Swami Chidananda Ji and other Monastics of SRF and YSS entered the Auditorium. They took their seats in the front on one side near the stage.

Swami Ji laid great emphasis on Love of Guruji and his sharing of the same with all the devotees. Swamiji during his Satsanga expressed his wish to personally meet all the devotees but that was not physically possible. He recalled his own experience of 1980 when he first saw Daya Mata Ji at Encinitas Ashram. He wanted to greet Ma personally but that was not possible as he was sitting on the other corner of the chapel. Ma read his thoughts and replied that she is meeting all devotees mentally. Swamiji stated that similarly he was meeting with all the devotees mentally.

A major portion of Swamiji’s talk was devoted to the concept of Darshan which he said is one of the main ingredients of Guru Ji’s teachings apart from Satsanga and Sadhana. He said that even though none of the devotees present had met Guruji while he was in body, but all of us know Guruji. He is always with us. That is the concept of Darshan where devotee feels the presence of his Guru even when the Guru is physically not there.

Another theme which revered Swamiji  elaborated was the importance of wordings of the Cosmit Chants with which the devotee can tune in. He quoted “heart to heart meeting, spirit and soul’s greeting, in the land beyond my dreams.” Also, he quoted “In the temple of silence, in the temple of peace, I will meet thee, I will touch thee, I will love thee and coax thee to my temple of bliss.” By going deep into these spiritualized chants, the Yogoda devotee can become one with its meaning and experience the feeling behind the words.

Brahmchari Dhairyanandaji and Brahmchari Sheelanandaji brought to him the prasad baskets for blessing. Swami Chidanandaji personally blessed both the baskets separately so that the same could be distributed by the Brahmcharis to all the devotees outside the entrance of the Auditorium. Thereafter, the devotees were requested to proceed to partake of Guru Langar.

Swamiji concluded his Satsanga and took leave along with his brother monks. All the devotees pranam-ed at the altar and proceeded to receive prasad and then moved to the langar Dining area behind the Administration building.

Swamiji’s visit was mesmerizing, to say the least. It had deeply touched all the 1500 devotees who were present and the energy and vibration was palpable. Devotees expressed heart felt gratitude for this special Satsanga and Darshan by Yogoda/SRF President, Swami Chidanandaji. Many devotees marveled at the simplicity and humility expressed by Swamiji. The experience is beyond words, said many a devotee. Some felt as though they had visited a ‘tirath’ within their heart. 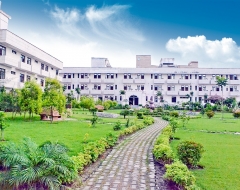 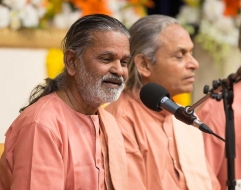 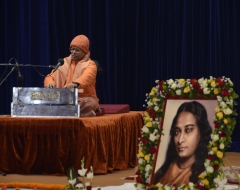 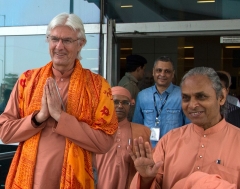