Bright winter sunshine welcomed with warm smiles set the tone for one of the most beautiful and blessed occasions to enter the New Year – the combined celebration of the Silver Jubilee Year of the foundation of YSS Delhi Kendra along with the Janmotsav celebrations of Guruji’s 125th birthday.

A message sent by YSS/SRF President Swami Chidananda Giri congratulating all the devotees on this joyous occasion was read out by Swami Lalitanandaji. In his satsanga, Swamiji read out the contents of this Silver Jubilee letter in English and further explained it in Hindi as well.

This heart-warming message which expressed love and respect of our beloved President, as also deep gratitude for all those who were present, and also those who had left their physical forms. Swamiji shared from the letter that “the Delhi Kendra that we see today is the result of their undeterred love for Gurudeva and the constant blessing and guidance that has been showered by our Guru and our line of Gurus.”

(Here is the letter from Swami Chidanandaji) Swami Lalitanandaji also went on to thank all the devotees, and those who were instrumental in bringing the Delhi Kendra to this level. Swamiji added that the diligent efforts of all the members present and not present have elevated the Kendra to this plane today.

Following this, Swamiji reminded each one of the real meaning of the celebrations of this special occasion – the remembrance of our Guruji. He mentioned how unconditional love is the basis of the Guru-disciple relationship. Reading out a passage from Guruji’s Autobiography of a Yogi, in which Swami Sri Yukteswarji speaks to Guruji, with a child-like innocence, about his unconditional love for him, which is reciprocated by Guruji.

The Guru Disciple relationship remains the cornerstone of YSS, and Swamiji laid great emphasis on this in his satsanga. He explained to the devotees how we can show our love to him on the occasion of his auspicious 125th birth anniversary by deepening our love for him by loyally following his teachings.

Following the satsanga, Swamiji performed arati at the altar, which was followed by pushpanjali accompanied by melodious bhajans which uplifted the entire atmosphere.

A little later, Swami Lalitanandaji inaugurated the Photo Gallery with exhibits documenting the evolution of the YSS Delhi Kendra through the years. The photos were beautifully arranged with tags to explain the context.

The conclusion of the celebrations with feasting on an extensive spread for the Guru Langar. Volunteers served this Guru Prasad to around 550 devotees who attended the function.

Previously, as part of the Silver Jubilee celebrations of YSS Delhi Kendra, devotees also participated enthusiastically in an evening of melodious bhajans rendered with devotion by Brahmachari Dhairyanandaji.

Braving the winter chill on December 21, 2017, devotees managed their chores and reached the Kendra before the function started at 4 pm. Brahmachariji conducted a group meditation for 90 minutes, following which the beautiful bhajans were sung.

The Kendra was reverberating with the melodious voice of Brahmachariji, who was accompanied by one of the devotees playing the pakhawaj and another hand cymbal.

The devotees were swaying and singing along in ever new joy as they were drenched in the melodious tunes of the bhajans. At the end of the programme, all of them received prasad from Brahmachariji. 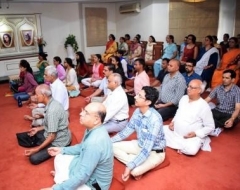 Special functions to commemorate events of spiritual significance will be organized at Delhi Kendra during the year...
Read More 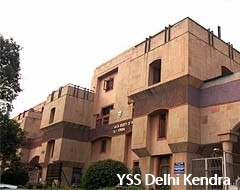 Situated in the heart of the national capital, YSS Delhi Kendra is a haven of peace in the bustling Connuaght Place...
Read More 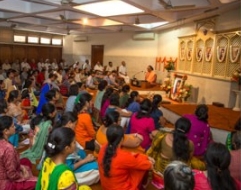 "Group meditation is a castle that protects the new spiritual aspirants as well as the veteran meditators....
Read More 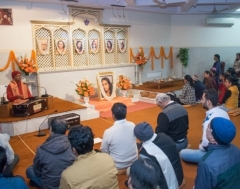 How to Reach YSS Delhi Kendra